The EPA has been promoting Fix-a-Leak Week (March 16-22, 2015) for the past seven years. But like many issues in public works, sometimes it is difficult to drive awareness and attract people's attention to the message. Even with great social media resources and a topic that left ignored could mean a loss of money, it's still not easy for a message like this to stand out in today's constant stream of information. So some communities are taking a different and innovative approach by promoting the problem of running water with a 5K Run, and a few races will even include a running toilet.

If you manage a water system and have been looking for an idea for getting your message out about Fix-a-Leak, you can check out the races listed at the end of this post and consider organizing something similar in your own community. As the popularity of the race in Roswell, Ga., shows, your one event can end up reaching 800 people from your community. If the idea of a race is too much for your staff to manage on their own with the often limited time and resources available, you can follow the lead of Fort Worth, Texas, and partner with a local running group or club to help organize and host your run.

Many of the communities also enhance their event by incorporating social media. A few have created videos to promote their run (included with each listing below) or encouraged participants to use social media to post photos of themselves running in the race. Some of the races are themed and include a costume contest. At least one of the races offers a prize to a random person who posts on social media something they learned from the event. And others, including the one in Fort Worth, have also arranged for groups such as the EPA, local water conservation organizations, and local hardware or plumbing companies to set up information booths at the race. What better way to raise awareness, offer information, and have some fun!? 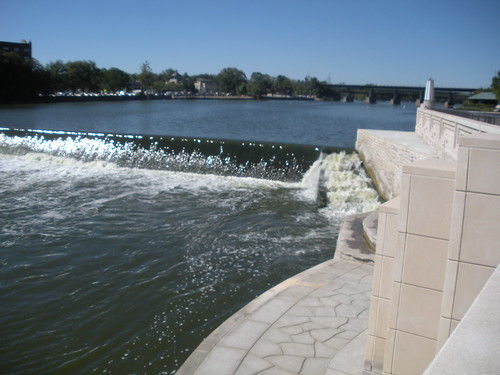 Over the last year, the EPA has successfully embraced the use of social media to help promote environmental stewardship. One of their most recent efforts is the launch of a water quality contest. According to their Web site, they are “looking for educational videos that inspire people to help protect our streams, lakes, wetlands, and coasts.”

Two winners will be chosen and each will receive $2,500. Their winning videos will be posted on the EPA Web site. According to the EPA, “entries must be received by Earth Day, April 22, 2009. The contest winners will be notified in May via e-mail.”

You can find out more about the contest by watching the video below and by visiting the EPA Web site.

As a civil engineer, the federal agencies I visit online are usually the DOT, EPA, and FHWA with an occasional click over to the USGS. Upon my entry into Second Life, I searched for these agencies within that virtual world and found nothing.

The only federal agencies that had made it into the virtual realm and set up islands were NASA, NOAA, and the CDC. And although from a personal level, I enjoyed visiting the islands and learning about agencies I really had known little about, I still held hope that one day, I would be able to visit the DOT, EPA, or FHWA in virtual form.

Well that day might be finally getting nearer. Last week, while I was traveling through Second Life researching colleges and universities for an article I am working on, I noticed an island called DOT World. I clicked it hoping it was open to the public, and sure enough I was teleported to the ground. There was only one building so I worried that maybe I had assumed wrong about the name of the island. Maybe someone had just happened to choose the common abbreviation for the Department of Transportation. But once I entered the small structure sitting in the corner of the sim, I knew it was the DOT for which I had searched. There on the conference table was the DOT logo.

As excited as I was to find the DOT in Second Life and as much as I wanted to tell everyone, I felt I should check to make sure they wouldn’t mind having their presence known – some agencies want to enter the virtual realm as quietly as possible while they figure out their approach to this new technology. So I IMed the island’s owner and received confirmation that I could publicly let folks know they were there. Unfortunately since then, they have closed off the island to public access so although they might not mind having folks know they are there, they seem to have decided they don’t want them poking around.

Anyway it appears official, the DOT has entered the virtual realm and set up shop in Second Life. And even though right now they only have one building for meetings and have decided not to let anyone visit, at least it is a start; perhaps they will even encourage the FHWA to follow them in. So with all the speculation about how progressive the Obama administration will be and how they will embrace new technologies, I have to think that it might not be long before I can attend classes and collect resources virtually. You don’t get much closer to putting a face to government than establishing an digital representations of your staff in avatar form.

The U.S. EPA continues to successfully implement Web 2.0 tools in an effort to reach out to the public. Their latest launch, Science Wednesday, “will feature experiences related to environmental science, brought to you by scientists, engineers, researchers, and perhaps the occasional science writer from across EPA.” Anyone can access this feature by visiting Greenversations: the U.S. EPA blog.

The US EPA has started up a multimedia site at www.epa.gov/multimedia that offers videos, audio/podcasts, and images. Some of the videos and podcasts cover information about Radon, water infrastructure, indoor air quality, and other topics related to the environment.

Visitors can also access an area of the site that allows for interaction between the EPA and the public. Here there are “green” tips for citizens and a link to a blog written by the Deputy Administrator, Marcus Peacock. The EPA also holds an “Ask EPA” session that is described as an “online interactive forum where you can discuss a wide range of environmental and human health issues with EPA’s senior officials.”